Discover the 24 international and Québec delegations 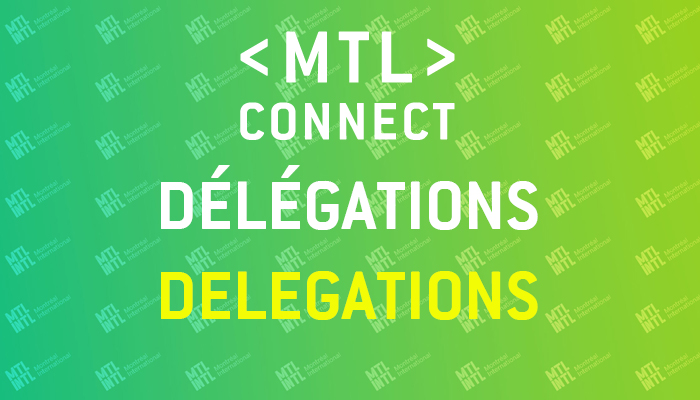 MTL connect 2020 is 600 speakers from Canada and from around the world, as well as 24 delegations coming from a dozen countries!

During the six days of programming, the digital ecosystems of Europe, Middle East, America, South America, Asia and Africa will be able to meet, share their know-how and forge new professional relationships.

This year, a place entirely dedicated to delegations will be available on the platform to discover new players in the digital industries and facilitate networking between economic players from different territories.

Prestigious organizations will guide a selection of companies and several entities to this new borderless edition of MTL connect.

1.“German-Canadian: City of the Future”, more than 60 companies and organizations are led by the General Consulate of the Federal Republic of Germany.

2. “Bavarian Business and Science Delegation” is presented by the State of Bavaria Montreal Office

5. In Spain, the Bureau du Québec à Barcelone brings together a delegation of movers & shakers from the innovation sector and will aim to foster networking and the development of new partnerships.

8. Italy led by FPA s.r.l., a company that has been organizing the PA Forum, a meeting point between public administrations, companies and citizens, for over 30 years. A focus on Italian reality and education will be one of the moments offered in this dens program.

14. Several countries in Africa led by Africa Web Festival, a platform that brings together actors in the digital and innovation ecosystem to build a connected Africa.

We are also delighted to have:

16. A delegation led by the international organization Women in Tech

17. A representation from the Creative Valley ecosystem, a startup incubator and an innovation and technology hub with a large network of partners in Asia, the United States and Africa.

Quebec delegations will also be present to showcase the know-how and companies of our region. We are fortunate to welcome:

20. The digital ecosystem of the DigiHub Shawinigan

21. A dozen companies from the city of Gatineau presented by ID Gatineau

24. A representation of the ecosystem of the la Semaine numériQC de Québec.

Discover our delegations in the dedicated area of the virtual platform, accessible for free with the Discovery Pass!

Once you have made your reservation, go to the delegations area!

Discover the 24 international and Québec delegations